In its June 2010 newsletter, the Civil War Preservation Trust has declared its mission to save more land at Bentonville, North Carolina, site of the last major battle between the remains of the Confederate Army of Tennessee, under General Joseph E. Johnston, and the combined armies of General William Tecumseh Sherman. The CWPT has posted on their website an impressive display of battleflags carried by various units in the battle, and can be viewed here.

After the First Georgia mustered out in March of 1862, most members of the Southern Rights Guard, Company "C" of the regiment, formed the Southern Rights Battery, of the Fourteenth Battalion Georgia Light Artillery.  Serving under the First's former adjutant, Captain Joseph Palmer and later Captain Minor W. Havis, the battery served at Bentonville and surrendered with Johnston's army on April 26, 1865.
Posted by George W. Martin at 3:25 PM No comments:

I am pleased to present the book trailer for "I Will Give Them One More Shot", recently posted on YouTube.  The video can also be seen on my website, http://www.ramseysfirstgeorgia.com/. Copyedit work continues on the manuscript with release still projected for December. 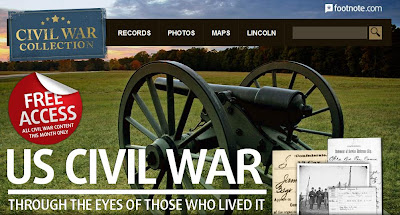 Footnote.com, the repository of hundreds of thousands of historical documents, has opened what they call a "microsite" for the American Civil War.  In celebration, Footnote is allowing free public access to all their Civil War documents during the month of June.  Footnote has teamed with the National Archives to display these artifacts in an easy-to-search format.
Posted by George W. Martin at 7:30 AM No comments:

By now, everyone knows about the disaster of the oil spill in the Gulf of Mexico.  My family's prayers go out to everyone affected by this terrible ordeal.  Pensacola, site of Forts Pickens and Barrancas, is beginning to see the first effects as tarballs begin to wash up on the pristine beaches.  Gulf Islands National Seashore, which oversees the forts, has set up a link on their website advising of the National Park Service's efforts to protect these treasures.  Clicking on the Park Service logo on the left column will open this link.  May all the treasures of the area, both historical and natural, be spared from this looming catastrophe.
Posted by George W. Martin at 9:30 PM No comments: 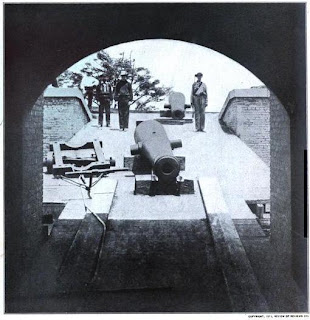 One hundred and forty-nine years ago, during the latter half of April through the beginning of June, the soldiers of the First Georgia Volunteers were battling boredom, mosquitoes and heat at their camp near Fort Barrancas, outside of Penascola, Florida. Sent to Florida to bolster General Braxton Bragg’s forces in preparation for a possible assault on Union-held Fort Pickens, the Georgians spent most of their time on picket duty, building fortifications and moving cannon from one place to another.
“I can tell you we have plenty of work to do,” wrote Private Archibald Sneed to his wife, “even on Sunday last we were hard at it filling up sand bags and caring them about 100 yards into Fort Barrancas. Today, the boys were at the same kind of work and this morning this afternoon they hauled a canon about a half a mile as they started very soon after breakfast.”

The photograph above is a vew taken from the fort’s sally port, and comes from Volume One of The Photographic History of the Civil War. The image was snapped in February of 1861 by photographer J. D. Edwards of New Orleans, two months before the arrival of the First Georgia, and shows some of the ordnance being moved into the fort by Confederate troops. While taken a couple of months before the arrival of the First, one can see the difficulties inherent in moving heavy guns in and out of the forts. Below is a photograph I took on a visit to Fort Barrancas, looking down the steep ramp into the sally port. Edwards camera would have been set up just inside the arched entryway. 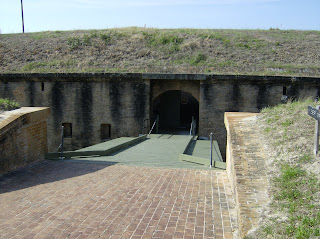 Another construction project involved building “sand batteries”, which were gun emplacements in the dunes and near the beaches positioned to bear on Fort Pickens. In a letter to home, a private in the Oglethorpe Infantry described how the batteries were fabricated:
“The sand batteries are built by digging a square pit in the sand some twenty feet square, then taking the sand and fill bags and fascines with it. You then take the bags and pile them up some three or four feet high, and sixteen or eighteen bags thick, and fill the cracks between the bags with sand. There are places about four feet wide left between the piles of bags to run the muzzle of guns out. In the pit there is a passage dug and boarded up with sand bags piled up around it, and perfectly protected with sand, for the magazine. The balls are piled up in the pit near the guns. On the out side in the rear, protected by sand bags, is a trench some five feet wide by three or four feet deep, for the men who are not at work at the guns to lay in.”

In early June, the First was ordered to Richmond. After two and a half months of manual labor on the Gulf Coast, the soldiers’ appearance had undergone a decided transaction. Wrote one soldier from Augusta: “Give my love to all at home; tell them we are all well and hearty, and terribly sunburnt, and look as rough as old rammers.”
Posted by George W. Martin at 8:04 AM No comments: