The time is now at hand.  Orders have been received.  In communities across Georgia, the companies selected to become part of the First Georgia Volunteer Infantry are packing up their traps and making ready to depart their homes, families and friends as they begin the great adventure.  Newspapers cheer for their home-town troops and, betraying a hint of sadness, wish them Godspeed as they go.

ORDERS TO MARCH.—The Newnan Guards have orders to march immediately and rendezvous at Macon. Destination Fort Pickens.—They will leave here on Monday next. The Guards will muster between sixty or seventy brave men, well officered, and all prepared to take a hand in the work of ridding Southern soil and forts of the presence of the old Federal Troops of Lincoln. If a fight is necessary and nothing else will satisfy the Black Republicans, we guarantee a good account from the Guards when the ball opens.


-------------------------------
Augusta Chronicle and Sentinel, March 29, 1861.
Under Marching Orders.
It is doubtless well known to most of our citizens, that the Oglethorpe Infantry, Capt. J. O. Clarke and Walker Light Infantry, Capt. S. H. Crump, tendered their services in aid of the Confederate States, which tender was accepted, and they were ordered to hold themselves in readiness to march upon official notice. That notice was received by the two companies yesterday morning, and they have been ordered by Adj. Gen Wayne to rendezvous at Macon on Tuesday next. They will leave this city, therefore, on Monday, at half-past 2 P.M., on the Wayneboro train. Their destination has not been announced, but it is presumed that Pensacola is the post for which they are mustered.
---------------------------
Columbus Daily Enquirer, April 2, 1861.
Departed—Company D, of the Southern Guards, Capt. Wilkins, took the afternoon train for Macon, the place of rendezvous of the Georgia troops, yesterday. They were escorted to the depot by all the other city companies, and platoon salutes fired on the eve of their departure. They are a fine looking body of men, well advanced in discipline for so short an organization, and will no doubt very creditably represent our city.
--------------------------﻿
Sandersville Central Georgian, April 3, 1861.
Gone to the Wars.
Our town wears an appearance of gloom. The “soul-stirring drum and ear-piercing fife” are no longer heard in our streets. Yesterday, the “Washington Rifles,” Capt. S. A. H. Jones, acting on orders received from the Executive of Georgia, took their departure for Macon, thence to Pensacola. The “Rifles” number eighty men. They are good citizens—gallant men and true, and if there is fighting to be done around and in Fort Pickens, we predict that this gallant corps will share largely in it.
-----------------------------﻿
Atlanta Daily Intelligencer, March 26, 1861.
GATE CITY GUARDS,--We understand that this excellent company of citizen soldiery, has been called into the service of the Confederate States Government. They will probably leave this city about the last of this week for Pensacola. Military companies from Newnan and Forsyth will accompany the Guards to their destination.—The Gate City Guards, has always been one of the crack companies of Atlanta, and should they be called into actual service, to make a reputation at the cannon’s mouth, we have strong faith that they will acquit themselves with honor to Atlanta, the State of Georgia, and the Government of the Confederate States.
Posted by George W. Martin at 10:15 AM No comments:

The Men Are On The Way

150 years ago today, a flood of submissions began to pour into government offices in the Georgia state capital at Milledgeville as militia units from across the state responded to Governor Brown’s call for volunteers. Eager to go to war, some 250 units tendered their services. To simplify the selection of which companies would be included in the first infantry regiment, it was decided to accept them in the order by which their tender was received (with one exception – more later). The very first to proffer their services was the Newnan Guards of Coweta County.  As a result, the Guards would be designated as Company “A” of the First Georgia Volunteer Infantry. The Guards and several other companies received orders to travel to Macon, where they were combined to form the First Georgia. March 18 was listed as the regiment’s official date of muster, as it was the date that the companies’ tender was received by the government. The other units chosen to make up the regiment were as follows:

The exception mentioned above was the Dahlonega Volunteers. Georgia in early 1861 was not entirely in favor of secession - several northern counties contained definite Unionist leanings. Governor Brown, who had spent much of his younger days in that section, decided that having a mountain company would help draw those counties toward supporting separation. Thus, the Volunteers received orders to report to Macon.

The men were on their way.  Few had any inkling of what they were bound for.
Posted by George W. Martin at 9:19 PM No comments: 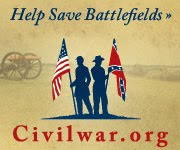 The Civil War Trust has just celebrated 30,000 acres of battlefield property saved.  Included in that total are 57 acres at Rich Mountain, and 26 acres at Corricks Ford, both in West Virginia, and both areas that had an impact on the First Georgia.  The Trust published the following news release yesterday:

Completion of Acquisition Efforts at Dallas and Resaca, Georgia, Push Preservation Group to New Heights(Washington, D.C.) – This week, the Civil War Trust, the nation’s leading organization seeking to protect the hallowed ground of our rapidly disappearing Civil War battlefields, announced that with the completion of its efforts at Dallas and Resaca, Ga., it has forever preserved more than 30,000 acres of historic land. To mark the occasion, Trust president James Lighthizer issued the following statement alongside a personal video message to the group’s supporters:

“When I took the helm of this organization in late 1999, neither I nor anyone involved in the battlefield preservation movement, could have predicted this level of success. But year in and year out, the passionate support of this organization’s members, and their heartfelt desire to leave a legacy greater than themselves for their children and grandchildren, has propelled us beyond my wildest expectations. To each and every one of these individuals I owe a great debt of personal thanks.

“The figure of 30,000 acres — the equivalent of 47 square miles — is almost too large to comprehend. But in the case of this organization, it is a tangible success that can be visited and appreciated one battlefield at a time. It’s 240 acres at Antietam, 710 at Corinth and 385 at Perryville. It’s 377 at Shiloh, 705 at Gettysburg and 1,798 at Brandy Station. It’s 117 on Morris Island, 952 at Malvern Hill and 212 at Wilson’s Creek. And more land at scores more battlefields — 110 sites spread across 20 states.

“But our work is far from done, with these sites are disappearing at the alarming rate of 30 acres per day. And so, although today we pause to celebrate our achievements, we will not rest in our efforts. As we begin the commemoration of the 150th anniversary of the Civil War, let us redouble our work to set aside these irreplaceable landscapes as a lasting memorial to the brave men who took up arms during our nation’s most turbulent hour. What legacy for the sesquicentennial could be more fitting?”

Indeed.  I urge all readers of this blog to support the Civil War Trust in their fine and important work.  The Trust can even set up a monthly payment plan drafted from a credit card (this is what I do).
Posted by George W. Martin at 4:35 PM No comments: