During its one year of existence, the First Georgia served under several commanders, some relatively unknown, others already famous or soon to become so. Over the next few posts, I will introduce the officers who commanded Colonel Ramsey’s Georgians. 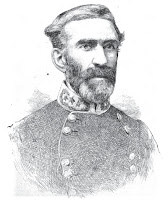 After the First was organized at Macon in April, 1861, the regiment was ordered to Pensacola to join the forces commanded by Brigadier General Braxton Bragg. Born in North Carolina in 1817, Bragg attended West Point, graduating fifth in the class of 1837. He was commissioned a second lieutenant with the U.S. Third Artillery, and saw service against the Seminole Indians in Florida. During the War with Mexico, Bragg served with the U.S. Fifth Artillery under General Zachary Taylor. During a Mexican attack during the Battle of Buena Vista, Taylor reportedly ordered Bragg to “give ‘em a little more grape.” The phrase stuck, and was associated with Bragg for years. At the outset of the Civil War, Bragg rose quickly from militia colonel to a Confederate brigadier general, his rise helped by his friendship with President Jefferson Davis. An uneven career as commander of different Confederate armies and conflicts with subordinates have caused much controversy about his military legacy. The general ended the war as President Davis’s military advisor. He later held positions as Chief Engineer for the State of Alabama and as a railroad inspector in Texas. Bragg died on September 27, 1876, in Galveston, and was buried in Mobile, Alabama.

After their arrival in Pensacola, the Georgians were assigned to Bragg’s Second Brigade, under the command of Colonel Henry D. Clayton. Born in Pulaski County, Georgia, on March 7, 1827, Clayton moved to Eufaula, Alabama after graduating from Emory and Henry College in Virginia. In August 1860, he was elected colonel of the 3rd Volunteers, an Alabama militia unit. Sent to Pensacola in early 1861, the Volunteers were mustered into Confederate service as the 1st Alabama Infantry. General Bragg gave the colonel command of the Second Brigade, which contained his regiment and the Second Alabama Battalion. Clayton resigned his commission in January 1862 and raised a new regiment, the 39th Alabama, which saw service Perryville and Stones River, where he was wounded. He was promoted to brigadier general on 1863, and served with the Army of Tennessee through its many battles. Clayton was promoted to Major General in 1864, commanding a division at the Battles of Franklin and Nashville. Worn out with the stress of command, Clayton resigned from the army shortly before its surrender in April of 1865. After war’s end, Clayton served as a circuit court judge and as president of the University of Alabama. He died in 1889.
Posted by George W. Martin at 8:23 PM No comments:

My apologies for the lack of posts over the past few weeks.  Several family emergencies and a week and a half of intense copyedit work on I Will Give Them One More Shot have kept me preoccupied.  More posts to come soon.
Posted by George W. Martin at 9:00 PM No comments: