Let me take this opportunity to wish one and all a very Happy Thanksgiving!
---------------------------------------------
150 years ago, high in the Allegheny Mountains, life was relatively quiet.  As winter settled in over the mountains, skirmishes between the enemy armies dwindled.  Soldier's thoughts were turned more toward keeping warm as snow fell on the camps of the First Georgia.  Many hoped that they would be moved to winter quarters in warmer climes.  Meanwhile, the men did what they could to keep their shelters snug and to keep boredom at bay, as described in this article from the Augusta (GA) Chronicle & Sentinel of November 24, 1861:


From a Member of the Walker Light Infantry.
We are permitted to take the following interesting extracts from a private letter of a member of the Walker Light Infantry. It shows that, even in that bleak country, camp life has its pleasant aspects.
CAMP BARTOW, Nov. 17th, 1861.
Dear Friend:--We are having a cold time now, the ground being covered with snow and ice. But few in our regiment have ever seen such cold weather; but the boys enjoy it and suffer no one to pass, not even the Colonel, without pelting the passer with snow balls. Colonel Clark and our Surgeon are enjoying themselves with this pleasant sport. Joe Taliaferro is sitting in the corner reading “Valentine Vox;” Capt. Crump and Fred. Stoy are talking over the adventures of the latter in the mountains; Russell is writing; Hood and Charley Doughty have gone on the Alleghanys to hunt provisions; Gibson, Deas, Bugg and Bowden are on picket guard; Larus has gone with a requisition for blankets and shoes, while the other members of the company are either keeping warm by the fire, or cooking their dinner.
The men enjoy good health, but I fear that many will suffer much with cold if we are not ordered soon to go into winter quarters. I do not think that any but insane man can approve prosecuting an active campaign in North Western Virginia this winter.
In our tent we are quite comfortable, having a fire-place. It is made by digging a trench which is covered with rock, one end being in the tent, in which we build a fire, a barrel with both heads knocked out is our chimney: but even with the fire my hands are so cold I can hardly write.
Monday.—I was interrupted in writing by Col. Clark bringing up the Regiment, armed with snowballs to take our battery. After a desperate fight, they succeeded.
Yesterday Henry J. Sibley arrived with blankets, &c. He gave to our company each man a blanket, undershirt and pair of socks. He also gave articles to the Oglethorpe Infantry and other companies.
An order has just been received for us to march to Staunton on Thursday, there to receive other orders. We are ordered to send our trunks and all extra baggage to-morrow.
As it is so cold I can hardly hold my pen, you will excuse brevity. The company are all well.
Yours, &c., W.
Posted by George W. Martin at 9:40 AM No comments:

I am deeply honored to report that "I Will Give Them One More Shot" has received another good review - this one written by Dr. James I. Robertson for the new magazine, "The Civil War Monitor". Dr. Robertson is one of the preeminent scholars of Civil War history, and I was thrilled to read his review of my work.  He writes:  "George Martin’s history of the first of the 1st Georgia Infantry regiments (ten different units bore the title) is a solid contribution to regimental studies. It is as well a fitting tribute to a Confederate force whose campaigning life lasted less than a year."

The entire review can be read here.
Posted by George W. Martin at 9:48 AM No comments:

On this Veteran's Day, I would like to take a moment to thank the veterans from all branches who have served and now serve in war and peace for their commitment to secure and preserve the freedoms that we citizens of the United States enjoy.

On the road again this weekend - this time to Dahlonega, Georgia, for the Dahlonega Literary Festival.  My ancestor who served in the First Georgia was a member of the Dahlonega Volunteers, Company "H" of the First.  I will have a table where I will be signing and selling books, and on Saturday morning will be participating in a forum on local history.  I invite all who might be in the neighborhood to stop by and say hi.

More information on the Festival can be found here.
Posted by George W. Martin at 9:35 AM No comments:

New Book On The "First Campaign" 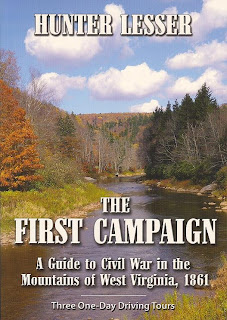 First, my apologies for taking awhile to post.  Between various obligations and a much needed vacation, I've been lax in my writing over the past few weeks.

I'd like to congratulate my friend and fellow historian W. Hunter Lesser on the publication of his new book, The First Campaign:  A Guide to Civil War in the Mountains of West Virginia, 1861.  The book, published by Quarrier Press of Charleston, West Virginia, describes three one-day driving tours through the Allegheny Mountains region marched and fought over during the first year of the Civil War.

As described by Hunter, "This guidebook offers three one-day driving tours filled with spellbinding scenery and adventure. Easy to follow directions, narratives and “fun facts” are your ticket to a delightful journey through these “enchanted” mountains."

I thoroughly enjoyed reading this (all the while remembering the treks that Hunter and I made through the back country), and hope to be able to travel back up to West Virginia to try out these routes for myself.  The book is priced at $15.95 (plus shipping and handling) and can be ordered through the West Virginia Book Company here.
Posted by George W. Martin at 8:06 PM No comments: