The War Settles Down

After the Confederate victory at Greenbrier River, a stalemate settled over the Allegheny Mountains as Federal and Confederate soldiers settled into their camps and began to prepare for winter.  The tedium of camp life was broken by an occasional skirmish, as Union troops probed the defenses at Camp Bartow.  One soldier, writing under the pen-name of "Nestor," described the activities in a letter to the Atlanta Southern Confederacy:


CAMP BARTOW, Green Briar River,
Pocahontas County, Va.,
Tuesday Evening, Oct. 15th, 1861.
Dear Confederacy: The almost painful monotony of our camp was dispelled this morning about ten o’clock, on the reception of intelligence that the enemy was coming down to attack us. Instantly the whole camp presented a most lively appearance, and imposing scene—men rushing from ditches and batteries, where they had been working all the morning, to their tents for their arms and accoutrements—the clear, loud ringing voices of our officers commanding their respective companies to “fall in”—the rapidity with which this order was executed—aid-de camps and scouts rushing across the field under full gallop, coming in from every direction with dispatches to Gen. Jackson, al tended to induce us to believe that there was hot work just at hand; and the cool, determined manner of the men, their resolute countenances, showed plainly how deeply they were impressed with the importance of performing, even at the cost of their lives, the duty expected to be assigned them, and their willingness, yes, eagerness, to enter into the contest.
Having stood under arms for some time, momentarily expecting orders to march out to meet the enemy, it was ascertained that the alarm was in consequence of our pickets stationed on the Green Bank Road, leading south-west from here, being fired upon by a small body of Yankees: and also in consequence of one regiment of Hessians being discovered at a point of the road leading to Cheat Mountain, about four miles distant from this encampment. Some are of the opinion that the enemy is sending out strong reconnoitering parties to find out, if possible, our most assailable point, after which he will attack us; while others believe that he is now sending around parties to flank us on either side, and that a large force will be brought up in front, so soon as these flankers shall have had time to gain their respective positions, when we will be simultaneously attacked from three different points. Whether these opinions prove to be correct or not, time alone can tell. One thing, however, is certain, the indications upon which the belief that we will be attacked here in a few days is predicated, are very strong, and as the enemy is not likely, from his experience on the 3d inst, to attack us without having a vastly superior force, you need not be surprised to hear of a great and bloody battle at this point soon.
Gen. [Henry R.] Jackson’s command occupies the same position now that it did prior to the battle of 3d inst. Since that time we have labored very hard in strengthening our old fortifications and in constructing new ones. The result of this work is, that we are now more than twice as able to repulse an attack from the enemy as we were on the day of the recent battle at this place, with the same arms and force we then had. But since that time we have received four pieces of artillery of the following calibre: Two 12-pound howitzers and two rifled 6-pounders, and we were also reinforced this morning by Col. [Samuel V.] Fulkerson’s Va. Regiment, which has been for some time past guarding a pass in the mountains about seven miles south-west from this place. With this addition in men and arms, and the strong position we now occupy, I dare say we can repulse the efforts of at least 15,000 Hessians to break through our lines; indeed, some are of opinion that with the force we now have here, our position is impregnable against an attack of 20,000.
The health of this division of the Army of N. W. Virginia is improving rapidly. But few cases of fever among the soldiers composing it. The weather for the last five days has been fair and very cool. We have had a heavy frost every morning since the 11th inst. I saw ice this morning one-fourth of an inch thick. If anything is to be accomplished here in a military point of view during this campaign, it must be done speedily; for the deep snows and bleak winds of winter will soon put a stop to all active military operations in N. W. Virginia.
NESTOR.
------------------------------------------------
I'd like to express my thanks to the Monroe County Historical Society and the Cabiness Chapter of the United Daughters of the Confederacy for their warm welcome during my recent book signing and presentation in Forsyth, Georgia.  Also thanks to the members of the Sons of Confederate Veterans Capt. C. F. Connor Camp #849 who braved the rainy weather to come to my talk in Newton, North Carolina.﻿
Posted by George W. Martin at 10:14 AM No comments: 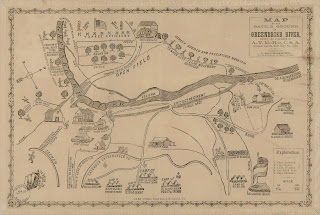 Shortly after midnight, Union General Joseph Reynolds, at the head of nearly 5,000 troops and thirteen pieces of artillery, began his march down from Cheat Summit Fort.  His target, Confederate Camp Bartow, under the command of General Henry R. Jackson, which was located along the banks of the Greenbrier River near an old stage tavern known as Travelers Repose.

Near dawn, Reynold's skirmishers struck a Confederate picket line under the command of Colonel James N. Ramsey of the First Georgia.  The pickets held off four separate attacks, but when the Federals brought up artillery, Ramsey ordered the troops to withdraw.  Ramsey himself was cut off from his troops as the action swirled around him.

Colonel Edward Johnson of the Twelfth Georgia, leading a detachment of about 100 men cobbled together from his regiment and the First Georgia, advanced from the fortifications to assist Ramsey's pickets.  Johnson was able to hold up the Federal advance for almost an hour, giving the troops in the breastworks time to bolt their breakfast and form up.  Finally giving way, Johnson's men streamed back toward the camp.  It was at this time that Private David Young of the Gate City Guards, the soldier mentioned in this blog's masthead, was killed.  While Johnson conducted his delaying action, Jackson deployed his troops.  The First Georgia was placed on the far right flank of Jackson's line.  "Your regiment have the post of danger," Jackson told Major George H. Thompson of the First.

The Union commander now ordered up his artillery, which went into battery just eight hundred yards in front of Jackson's redoubts.  During the next four hours, a titanic artillery duel continued between the two sides, with the thunder of the cannon echoing across the valley.  Reynolds also tried advancing troops toward each of the Rebel's flanks, but was repulsed each time.  Finally, having made no progress against the Confederate entrenchments, and observing reinforcements coming up behind Jackson, Reynolds broke off the attack and retreated back to Cheat Summit Fort.

The Confederates celebrated their defensive victory.  After the battle, a soldier from the Quitman Guards (Company K of the First), out looking for souvenirs on the battlefield, found the flag of the 7th Indiana Regiment leaning against a tree.  The banner was presented to General Jackson and forwarded to Richmond as a trophy of the First Georgia.
Posted by George W. Martin at 9:20 AM No comments: