A Big Rebel Yell and a Yankee Huzzah!

The Civil War Trust (formerly the Civil War Preservation Trust) has just announced a victory in the fight to prevent Walmart from building next to the Wilderness Battlefield:

Preservation community pleased with decision by retail giant to drop plans to build a supercenter within historic boundaries of Wilderness battlefield(Orange, Va.) – In an unexpected development, Walmart announced this morning that it has abandoned plans to pursue a special use permit previously awarded to the retail giant for construction of a supercenter on the Wilderness Battlefield. The decision came as the trial in a legal challenge seeking to overturn the special use permit was scheduled to begin in Orange County circuit court.

“We are pleased with Walmart’s decision to abandon plans to build a supercenter on the Wilderness battlefield,” remarked James Lighthizer, president of the Civil War Trust. “We have long believed that Walmart would ultimately recognize that it is in the best interests of all concerned to move their intended store away from the battlefield. We applaud Walmart officials for putting the interests of historic preservation first. Sam Walton would be proud of this decision.”

“We stand ready to work with Walmart to put this controversy behind us and protect the battlefield from further encroachment,” Lighthizer stated. “We firmly believe that preservation and progress need not be mutually exclusive, and welcome Walmart as a thoughtful partner in efforts to protect the Wilderness Battlefield.”

In August 2009, the Orange County Board of Supervisors approved a controversial special use permit to allow construction of the Walmart Supercenter and associated commercial development on the Wilderness Battlefield. A wide range of prominent individuals and organizations publicly opposed the store’s location, including more than 250 American historians led by Pulitzer Prize-winners James McPherson and David McCullough. One month after the decision, a group of concerned citizens and the local Friends of Wilderness Battlefield filed a legal challenge to overturn the decision.

The Battle of the Wilderness, fought May 5–6, 1864, was one of the most significant engagements of the American Civil War. Of the 185,000 soldiers who entered combat amid the tangled mass of second-growth trees and scrub in Virginia’s Orange and Spotsylvania counties, some 30,000 became casualties. The Wilderness Battlefield Coalition, composed of Friends of Wilderness Battlefield, Piedmont Environmental Council, Preservation Virginia, National Trust for Historic Preservation, National Parks Conservation Association, and Civil War Trust, seeks to protect this irreplaceable local and national treasure.

The Civil War Trust is the largest nonprofit battlefield preservation organization in the United States. Its mission is to preserve our nation’s endangered Civil War battlefields and to promote appreciation of these hallowed grounds. To date, the Trust has preserved nearly 30,000 acres of battlefield land in 20 states. Learn more at www.civilwar.org.

The Die Is Cast

To dissolve the Union between the State of Georgia and the other States united with her under a compact of Government entitled “The Constitution of the United States of America.”

We do further declare and ordain, That the Union now subsisting between the State of Georgia and other States under the name of the “United States of America,” is hereby dissolved, and that the State of Georgia is in full possession and exercise of all those rights of sovereignty which belong and appertain to a free and independent State. 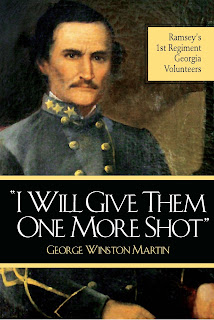 I am pleased and excited to announce that my book, I Will Give Them More Shot:  Ramsey's 1st Regiment Georgia Volunteers, has just been released by Mercer University Press.  The result of over six years of research and writing, this is very much a dream come true for me.  I would like to express my gratitude to Dr. Marc Jolley and the rest of the staff at Mercer University Press.  I Will Give Them One More Shot is available through Mercer Press at http://www.mupress.org/, as well as most major online booksellers.  My great hope is that you will enjoy reading the book as much as I did researching and writing it.
Posted by George W. Martin at 2:11 PM No comments: 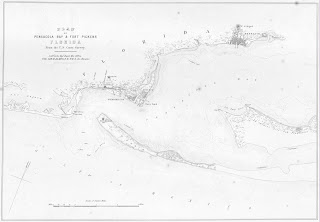 Even before officially declaring itself out of the Union, Florida began moving to secure the military sites within its borders. On January 6, Florida troops took possession of the U.S. Arsenal at Apalachicola, and the next day, Fort Marion in St. Augustine was taken over.
Near Pensacola, First Lieutenant Adam J. Slemmer of the First U.S. Artillery, anxiously watched the unfolding crisis. Lt. Slemmer’s commanding officer, Captain John H. Winder, who would become a Confederate brigadier general and be placed in charge of the Confederacy’s prisons, was absent on leave. This left Slemmer in command of U.S. Army posts around Pensacola Bay, which included Forts Barrancas and McRee on the mainland, and Fort Pickens across the bay on Santa Rosa Island. Slemmer began to prepare for trouble. 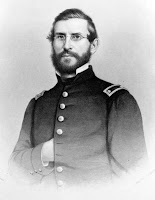 On the 8th, Slemmer directed that gunpowder stored in the old Spanish Water Battery be moved into Fort Barrancas, and “caused all the batteries to be put in working order.” Late that night nervous sentries guarding Barrancas caught sight of the dark silhouettes of men approaching the gates. The shadowy figures were Florida militia, their purpose unknown. Many historical accounts say that the Union sentries fired upon the trespassers. Lt. Slemmer’s report does not specifically say that shots were fired.
“That night a body of men (about twenty in number) came to the fort with the evident intention of taking possession. The corporal of the guard caused the alarm to be given, upon which the assailants retreated precipitately. The guard was immediately strengthened by half the company, but nothing further occurred that night.”
If the guards did fire their weapons, these shots could arguably be called the first fired in the American Civil War.
Florida would secede from the Union two days later, on January 10. Lt. Slemmer found himself in a situation very similar to Major Robert Anderson’s at Charleston. Like Anderson, Slemmer decided that his posts on the mainland were indefensible with the small force at his disposal, so he ordered the guns of Forts Barrancas and McRee spiked, and transferred his troops out to Fort Pickens. Florida troops took possession of the mainland fortifications on the 12th, and demanded the surrender of the Navy Yard. Without even a hint of resistance, Armstrong turned control of the Yard over to the Floridians. Armstrong would be court-martialed on March 12 for surrendering his post to the Floridians, and was sentenced to be suspended from the service for five years. Lieutenant Slemmer, on the other hand, was acclaimed as a hero throughout the north, and received a promotion to Major as a reward for his actions at Fort Pickens.
Posted by George W. Martin at 11:05 AM No comments:

"You May Be Needed"

On January 2, 1861, Georgians braved a cold rain as they traveled to their polling places. The state legislature had called for a convention to be convened in Milledgeville on January 18, for the purpose of debating the issue of secession from the United States and other matters. Voters in each county spent that day selecting delegates to represent them at the convention. In Muscogee County, James N. Ramsey was chosen, along with Henry L. Benning and Adolphus S. Rutherford, Sr.
The various militia companies eagerly waited for the great adventure of war to begin. Their officers could barely contain their impatience. Back in November, Captain George M. Hanvey of the Newnan Guards had written to outgoing South Carolina Governor William H. Gist, offering the services of his company in the event that the United States government attempted to “coerce” that state into remaining in the Union.
Governor Joseph E. Brown had no intention of allowing Georgia troops to head off to other states. In the January 8 edition of the Milledgeville Federal Union, Brown flatly refused the request of several companies to leave the state.


Military.
In reply to a telegraphic dispatch sent to Governor Brown, Jan. 1st., by the commanding officer of the Volunteer Companies of Macon, asking “if he would sanction the movement of Georgia Volunteers going to the aid of South Carolina.” The Governor sent the following dispatch:

Savannah, Jan. 2d, 1861.—To Captains R. A. Smith, E. Fitzgerald, T. Parker, L. M. Lamar, and Lieut. Wm. H. Ross: I will not. Your first duty is to Georgia—South Carolina is able, at present, to take care of herself—you may be needed at home very soon.

JOSEPH E. BROWN.
It would not be long before Brown would call these troops to the service of Georgia.

---------------------------------------------------
My little effort here at One More Shot has been honored by being added to the blogroll of Michael Noirot’s This Mighty Scourge. Michael describes his blog as “an examination of the men, companies, regiments and brigades that fought in the American Civil War – plus book reviews and author interviews.” I’ve included his site on my blogroll for some time – I especially enjoy listening to the interviews.  I encourage everyone to check out this excellent weblog.
Posted by George W. Martin at 10:19 PM No comments: