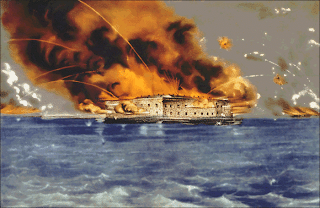 150 years ago today, the First Georgia Volunteer Infantry was enroute to Pensacola.  As they traveled the route to Florida, the soldiers learned of and cheered the news from Charleston.  The following is from a letter to the editors of the Augusta Chronicle & Sentinel, dated April 18, 1861:


It will no doubt be the pride of Georgia to know that there is but one feeling animating her Regiment, and that is, harmony and the determination to maintain the honor of Georgia, noble mother of us all.  There is now a regimental parade every afternoon at 8 ½ o’clock.  The encampment is under strict military discipline, and Gen. Bragg has placed this point under martial law.  The Confederate soldiers are active, and determined to have Fort Pickens.
Hurrah for the Carolinians!  Our flag waves over fallen Sumter, and Major Anderson is spared the necessity of shedding the blood of those dear to him.  Pickens, we hope, will fall into our hands as successfully as Sumter; but Pensacola may yet run red with the blood of Americans in fratricidal strife.  If such be Nature’s decree, then “welcome be Cumberland’s steed to the shock—let them dash his proud foam like a wave on the rock”—for Georgians, and Mississippians, and the true Confederate troops, will cheerfully yield their blood and life rather than be the subjects of bigotry and insolence.
Posted by George W. Martin at 9:15 AM