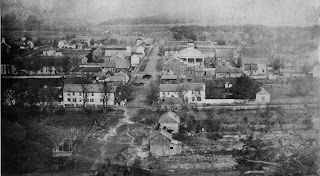 For the past several days, General Thomas J. Jackson’s Valley Army has been struggling through terrible winter conditions as it moves toward Romney.  The Stonewall Brigade, under General Richard Garnett, entered the town on January 15.  General Loring’s brigades of the Army of the Northwest reach Romney by the 17th.  The sight that greets the troops is appalling, for the Union garrison had vandalized the town before retreating.  “Nearly every dwelling, mill, and factory,” wrote Dr. Robert L. Dabney, Jackson’s friend and soon-to-be chief of staff, “. . . was consumed; the tanneries were destroyed, and the unfinished hides slit into ribbons; the roadside was strewed with the carcasses of milk-kine, oxen, and other domestic animals, shot down in mere wantonness. As they came in view of the town, lately smiling in the midst of rural beauty, scarcely anything appeared, by which it could be recognized by its own children, save the everlasting hills which surround it. Gardens, orchards, and out-buildings, with their enclosures, were swept away; the lawns were trampled by cavalry horses into mire; many of the dwellings were converted into stables, and the blinds and wainscot torn down for fuel; and every church, save one, which the Federal commander reserved for the pious uses of his own chaplains, was foully desecrated.”
Posted by George W. Martin at 8:40 AM