Even though he was Southern born, Cummings Marshall must have felt great pressure to enlist in the service, with so many adult males gone to the army. On September 3, 1864, Cummings enlisted in the Ninth Company, New Hampshire Heavy Artillery, which became Company I of the First New Hampshire Heavy Artillery, commanded by Captain Charles O. Bradley. Sent to Washington for garrison duty, the companies of the First were dispersed between the several forts surrounding the city, with Company I being posted to Fort Reno. Fort Reno (or Battery Reno as it was also known) was located on the northwest side of the District of Columbia, roughly two miles west of Fort Stevens. Cummings' tour of duty was largely uneventful, though he was injured in a bizarre accident in March of 1865. During a drill, the company was marching at the double-quick across the parade ground, when several soldiers in the rear ranks, including Cummings, stumbled and fell while crossing a ditch. For several days afterwards he lay in his tent complaining of great pain in his abdomen. The injury, described as a “rupture”, would plague Cummings for the rest of his life.

Near the end of the war, my great-great grandfather, Moody Marshall, made the journey south to retrieve Lucinda and daughter Melinda. Moody wrote of great devastation as he travelled southward. Retrieving Lucinda and Melinda, he brought them back to northern New Hampshire. With the war’s close, William Henry made his way north to join his mother. The First New Hampshire was mustered out of service in Washington on June 15, 1865. Cummings returned to Colebrook, where he lived with his wife Julia and growing family until 1875, when they moved to Lowell, Massachusetts. At some point, Cummings and Julia were divorced, and Cummings returned to Colebrook, where he opened a small candy store and joined the local post of the Grand Army of the Republic. William Henry returned to his miner’s roots, prospecting for silver in the nearby mountains. The unrepentant Rebel had a reputation as a bit of a trouble-maker, especially when the G.A.R. paraded on Memorial Day – Henry would gallop his horse through the “Yankee” ranks. As the years passed, the members of the Marshall family passed away, and were interred in the Colebrook Village Cemetery. There the Yankee and the Rebel brothers, once enemies in war, rest together in eternal sleep. 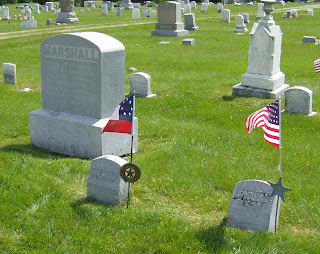 The Marshall Family gravesite in Colebrook, New Hampshire.  Each year, I supply a Union 34-star flag and a Confederate Stars and Bars to the local American Legion post to be placed on the graves on Memorial Day.  My thanks to Karen Ladd and the members of American Legion Post 62 in Colebrook.
Posted by George W. Martin at 9:30 PM