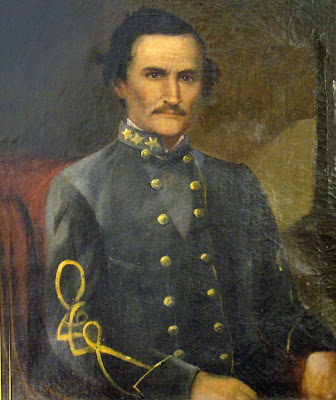 Ms. Loretta Andrews, a direct descendent of Colonel James N. Ramsey’s, is the owner of a strikingly impressive portrait of the Colonel. This image, which appears courtesy of Ms. Andrews on the cover of I Will Give Them One More Shot, has several interesting stories attached to it. The original portrait was painted sometime before the beginning of the Civil War and showed Ramsey in civilian clothes. At some point either during or after the end of the war, another artist was commissioned to add Ramsey’s Confederate colonel’s uniform to the portrait. Interestingly, a photograph of the Colonel taken from an old newspaper clipping in Ms. Andrews’s possession shows Ramsey in an almost identical pose. One theory is that Ramsey had the photograph taken to use as a guide for the artist to using in reconstructing the uniform on the portrait. 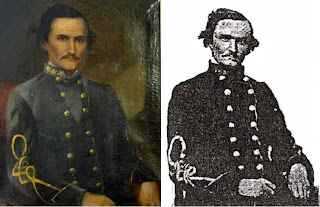 Unfortunately, the pigment used was not as good as the original and over time has faded, exposing a ghostly shadow of Ramsey’s antebellum garments. If one looks closely, his bowtie and white shirt can be discerned.

The painting is very large with a very ornate frame, and seems to fill the entire wall at Ms. Andrews home. As one walks across the room, it almost appears that Colonel Ramsey is following with his intense stare, his eyes almost stalking you as you pass before him.

This strange property actually contributed to the canvas being damaged. An extremely superstitious servant girl worked in the home where the painting was displayed. The young woman imagined that the Colonel was constantly staring at her, and managed to escalate her fears into a phobia that the portrait was bewitched. Her terror soon reached a degree as to be unbearable. Determined to exorcise the demon in the painting, she snatched up a fireplace poker and stabbed the picture, puncturing the canvas. The tear was repaired and painted over. A close examination of the picture reveals the patch just about the point of Ramsey’s left collarbone. 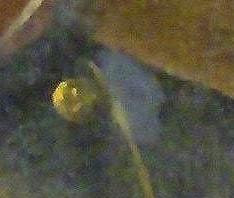 It is not known what happened to the servant girl. It’s probably safe to assume that her employment in the household ended that day!
Posted by George W. Martin at 8:55 AM