A couple of years ago, I was asked to write an article about how Memorial Day descended from Confederate remembrance observances after the war.  I present it here as my tribute to the fallen of all wars, past and present.

Memorial Day. The name brings to mind parades, speeches, cookouts—and a day off work for most people. Families flock to parks and beaches to celebrate the first weekend of the summer vacation season. It is a day of fun and frolics.

Unfortunately, many Americans seem unaware of the true reason for the holiday. In the midst of their barbeques and celebrations, they fail to realize that Memorial Day was created for the purpose of remembering those who gave their lives so that this country would continue as the strong and free nation it is today. Fewer still are aware that the observance traces its roots back to the most divisive time in this country’s history, the American Civil War. Following that terrible conflict, in which thousands of Americans died, communities North and South sought proper ways to honor the sacrifices made by their war dead.

Many towns profess to be the site of the first Memorial Day. On May 5, 1866, ceremonies were held in Waterloo, New York, to remember those lost in the war. Efforts by that community to be recognized as the first town to observe the day led to Waterloo being declared the official birthplace of the holiday in May 1966.

While Waterloo may indeed be the first Northern town to have held remembrance services, it seems likely that the idea of setting a day aside to decorate soldiers’ gravesites occurred spontaneously throughout the country, especially in the devastated states south of the Mason-Dixon line. Though a case can be made that Columbus, Mississippi, had the first Memorial Day, (on April 25, 1866, several local women came together to place flowers on soldiers’ graves, many who died in the Battle of Shiloh), another town by the same name may have the best claim for having the first observance held with the intention of its continuing as an annual event.

Shortly after the end of the war, Columbus, Georgia resident Elizabeth Rutherford began reading The Initials, written by novelist Baroness Jemima von Tautphoeus of Great Britain. A passage in the book, a novel about life in Napoleonic Bavaria, caught Rutherford’s eye. The paragraphs described the care and decoration of heroes’ graves on All Saint’s Day.

Miss Rutherford, known as “Lizzie”, had been active in the Columbus Soldiers’ Aid Society, which had been formed during the war to collect clothing and other supplies for Georgia troops, and to nurse convalescing soldiers in the local hospitals. After the conflict’s end, the Society maintained Confederate graves in Linwood Cemetery.

During a conversation with other Columbus ladies, Lizzie mentioned what she had read in The Initials. Elizabeth’s cousin, Mrs. Mary Ann Williams, almost certainly related her own poignant story during the discussion. Mrs. Williams husband had been a colonel in the Confederate army, dying of disease in January of 1862. The colonel’s widow and their four children visited the cemetery almost every day, laying new flowers on the Colonel’s grave. One of her daughters would pull the weeds from nearby soldiers’ burial sites, then cover them with flowers. Sadly, the little girl also died shortly thereafter. Her grieving mother continued to care for the graves, which her daughter had called “her soldiers.”

Inspired with the concept, the women excitedly called a meeting of the Soldier’s Aid Society. Miss Rutherford was unable to attend due to caring for a sick relative, so she entrusted Mrs. Williams to present to the group a plan for setting aside one certain day each year to clean and decorate the graves of Confederate soldiers. From this meeting, the Ladies Memorial Association was formed. April 26, 1866, the anniversary of General Joseph E. Johnston’s surrender, was selected to be the first Columbus “Remembrance Day”. 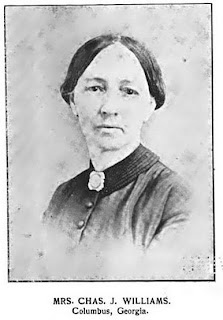 The Ladies Memorial Association was determined to share the idea with the rest of the South. To that end, Mrs. Williams, who had been elected secretary of the Association, sent letters out to various groups, urging them to join in the commemoration. “The ladies are now, and have been for several days,” wrote Mrs. Williams, “engaged in the sad but pleasant duty of ornamenting and improving that portion of the city cemetery sacred to the memory of our gallant Confederate dead, but we feel that it is unfinished work unless a day be set apart annually for its special attention. We cannot raise monumental shafts and inscribe thereon their many deeds of heroism, but we can keep alive the memory of debt we owe them by dedicating at least one day in the year, by embellishing their humble graves with flowers, therefore we beg the assistance of the press and the ladies throughout the South to help us in the effort to set apart a certain day to be observed, from the Potomac to the Rio Grande, and to be handed down through time as a religious custom of the South, to wreathe the graves of our martyred dead with flowers, and we propose the 26th day of April as the day. Let every city, town and village join in that pleasant duty. Let all alike be remembered from the heroes of Manassas to those who expired amid the death throes of our hallowed cause.”

The women approached Colonel James N. Ramsey of Columbus to speak for them. Commander of the First Georgia Volunteer Infantry, the first regiment fielded by the state for Confederate service, Ramsey was very much an unrepentant Rebel. Though ill health had prevented him from remaining in the army after his regiment mustered out on March 11, 1862, Ramsey remained a proud advocate of the Southern cause throughout the war and beyond. In 1868, speaking at the “Bush Arbor” Convention in Atlanta, called to protest the new Republican state government, Ramsey declared “that the true men of the South are ready to rally once more under the Rebel flag and try the issue of the cartridge box.”

Union occupation soldiers, alarmed by the prospect that such a gathering might lead to a disturbance, threatened to prevent the proceedings. Worried, several ladies went to Colonel Ramsey, who assured them the ceremony would take place. “I will perform the duties assigned to me,” he told the women, “and will assume all responsibility; and by the help of God and the presence of the women and children, I will tell the world of the heroic deeds and patriotic devotion of the fallen comrades.”

Despite the opposition of the Federal authorities, the commemoration services went on as scheduled. Meeting first at St. Luke Methodist Church, the congregation moved to Linwood Cemetery. Dark clouds were building overhead as Colonel Ramsey began to speak. “Ladies and gentlemen, we meet to celebrate a sad anniversary. Heaven sympathizes with us, has draped the skies in mourning to suit the gloomy habits of our souls and bear a just remembrance to our fortunes. Amid the wreck of earthly hopes, the loss of liberty and the desolation of our homes, we are here to pay appropriate honor to the memory of our brave comrades who fell by the conqueror’s sword.”

Spatters of rain began to fall. Ramsey gazed skyward as the droplets coursed down. “Women of the South,” he continued, “be encouraged, the angels are in sympathy with you, and are now mingling their tears with yours over the graves of our noble dead.”

Following the ceremony, the Columbus Ladies Memorial Association resolved to continue commemorating this day “as long as flowers grow and the memory of brave deeds last.”


In 1868, Elizabeth Rutherford married Captain Roswell Ellis, a veteran of the Second Georgia Infantry. After her death on March 31, 1873, “Lizzie” Rutherford Ellis was laid to rest in Linwood Cemetery, the site of that first Memorial Day. A marker placed by the Lizzie Rutherford chapter of the Daughters of the Confederacy memorializes Rutherford as “The Soldiers Friend,” and “The Suggester of Memorial Day.” When Mary Ann Williams died on April 5, 1874, she was buried with full military honors. For years afterwards, Confederate veterans would leave flowers on the two ladies’ graves. Colonel James N. Ramsey, who spoke that day, died November 10, 1870, and lies in an unassuming, brick covered grave in Linwood.

Other towns throughout Georgia followed the example of the Columbus Ladies Memorial Association, creating their own remembrance societies and ceremonies. Across the former Confederacy, the custom of decorating and caring for veteran’s graves spread, though many states chose different days for their observances. In 1867, Nella L. Sweet published “Kneel Where Our Loves Are Sleeping,” a song dedicated to “The Ladies of the South who are Decorating the Graves of the Confederate Dead."

Tradition holds that the wife of General John A. Logan, commander of the Union veterans association known as the Grand Army of the Republic, observed Confederate graves around Blandford Church in Petersburg, Virginia, covered with flowers and marked with small Confederate flags. Mrs. Logan related the incident to the General, who seized upon the idea. On May 5, 1868, General Logan issued Order # 11, proclaiming an annual “Decoration Day,” to be held each year on May 30, “for the purpose of strewing with flowers or otherwise decorating the graves of comrades who died in defense of their country during the late rebellion, and whose bodies now lie in almost every city, village, and hamlet church-yard in the land.”

The commemoration has evolved through the years, finally being designated as the national Memorial Day we celebrate every May. Legislation was passed by the United States Congress in 1971 declaring the day as a national holiday, designating the day of observance as the last Monday in May. Many Southern states continue to celebrate Confederate Memorial Day, each setting their own date for the observance. In 1874, the Georgia legislature specified its commemoration on the original date, and the state continues to observe the holiday on April 26. Each year on this day, the University of Georgia in Athens displays an original copy of the Confederate Constitution in its main library.
Posted by George W. Martin at 10:43 PM